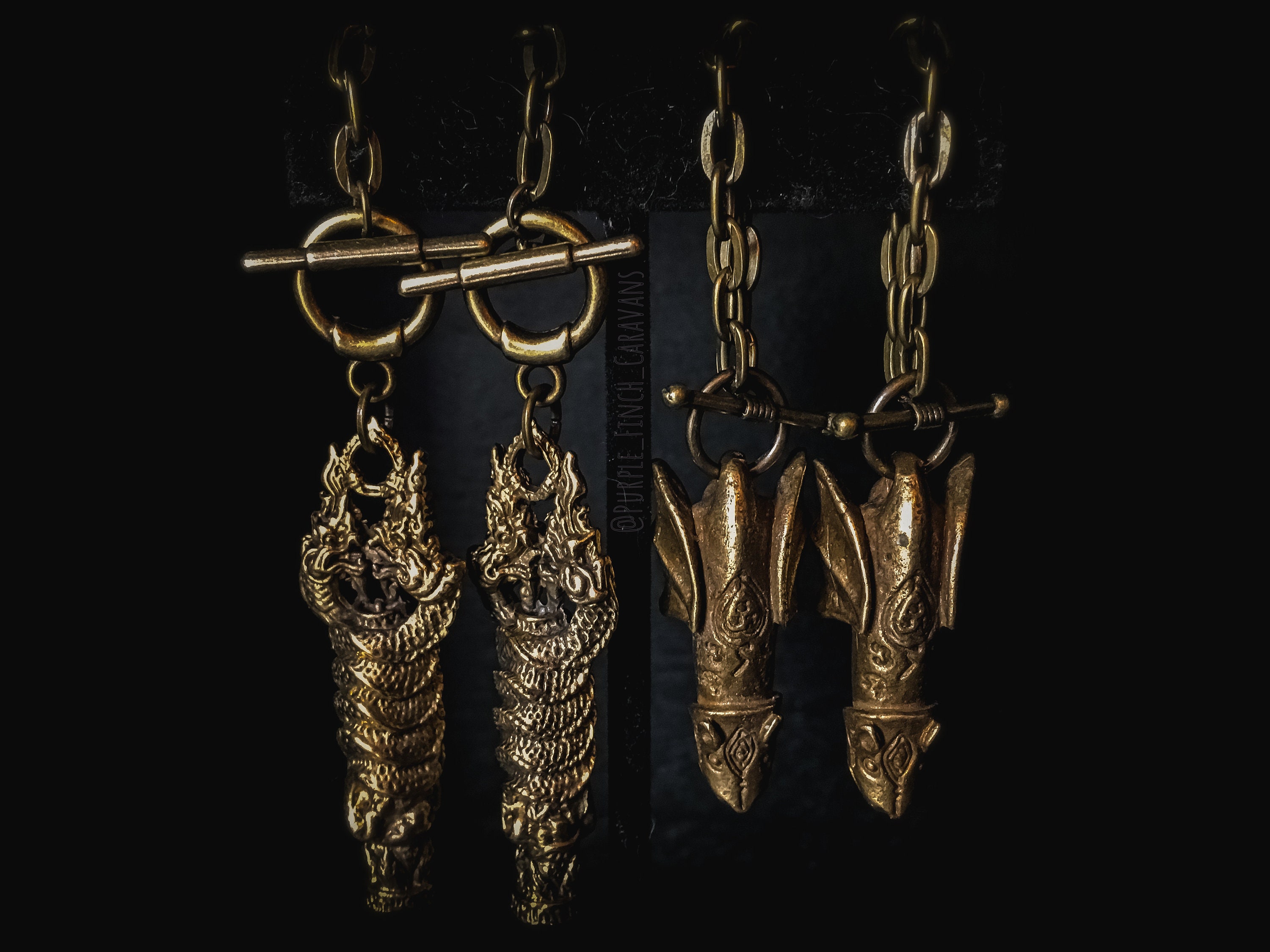 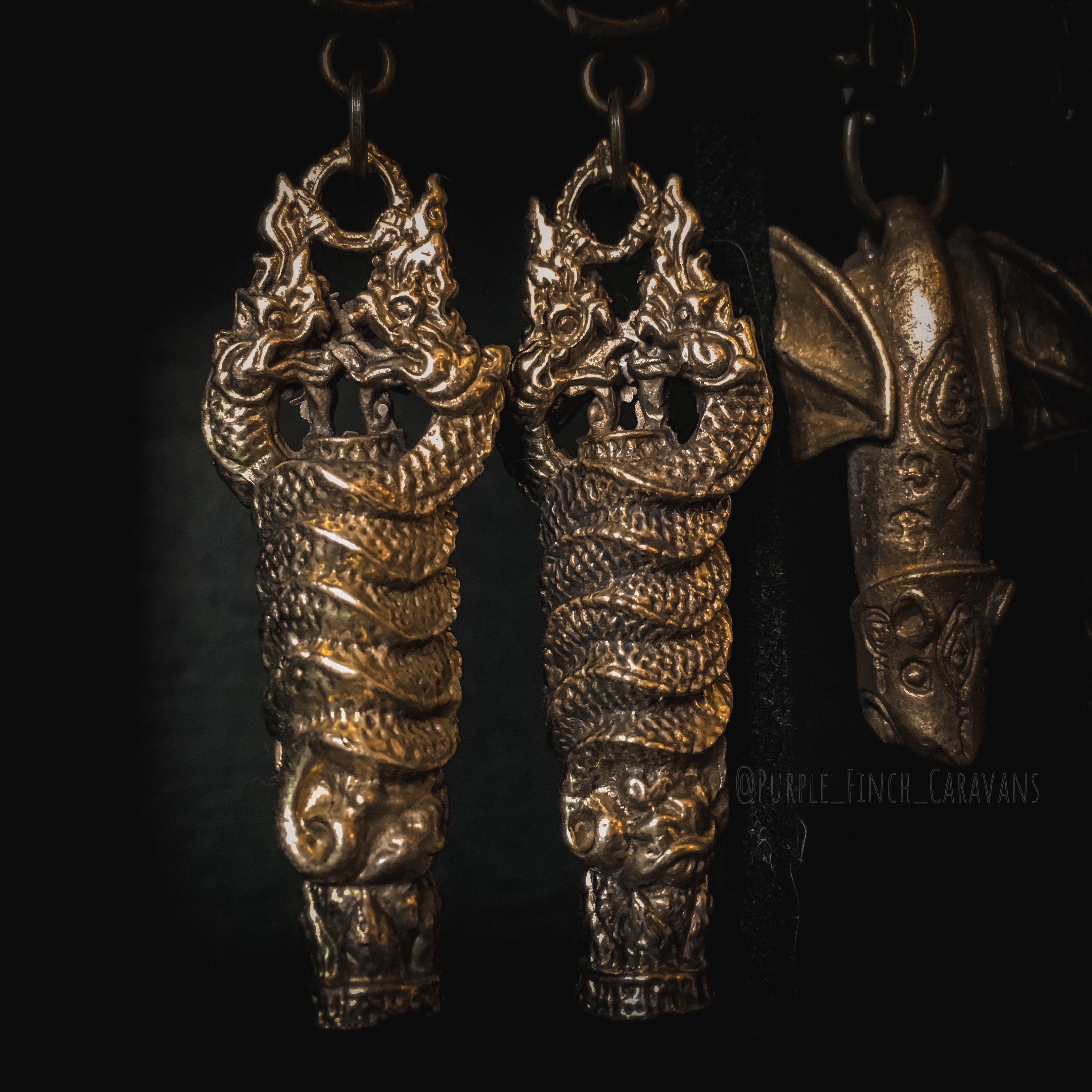 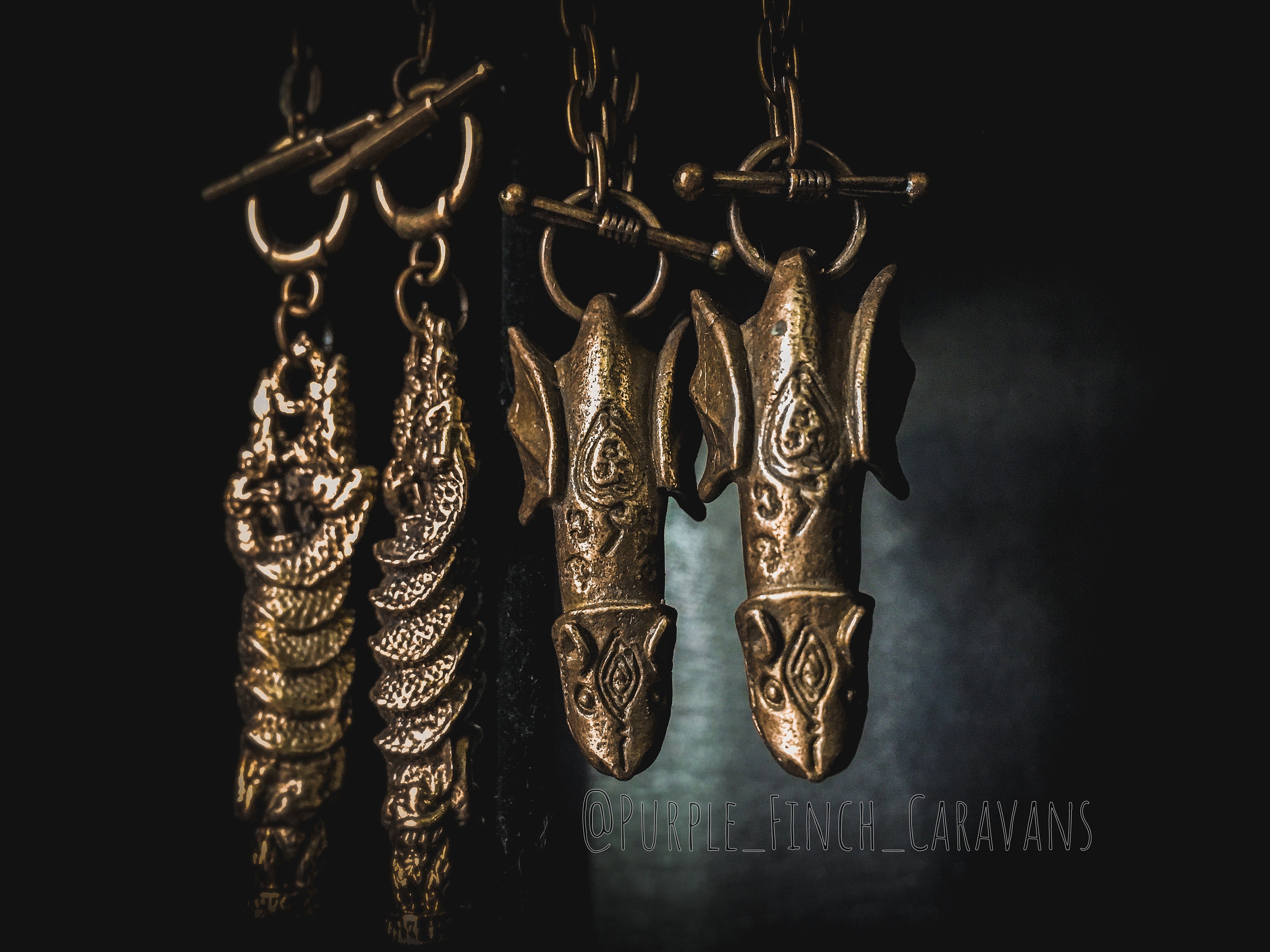 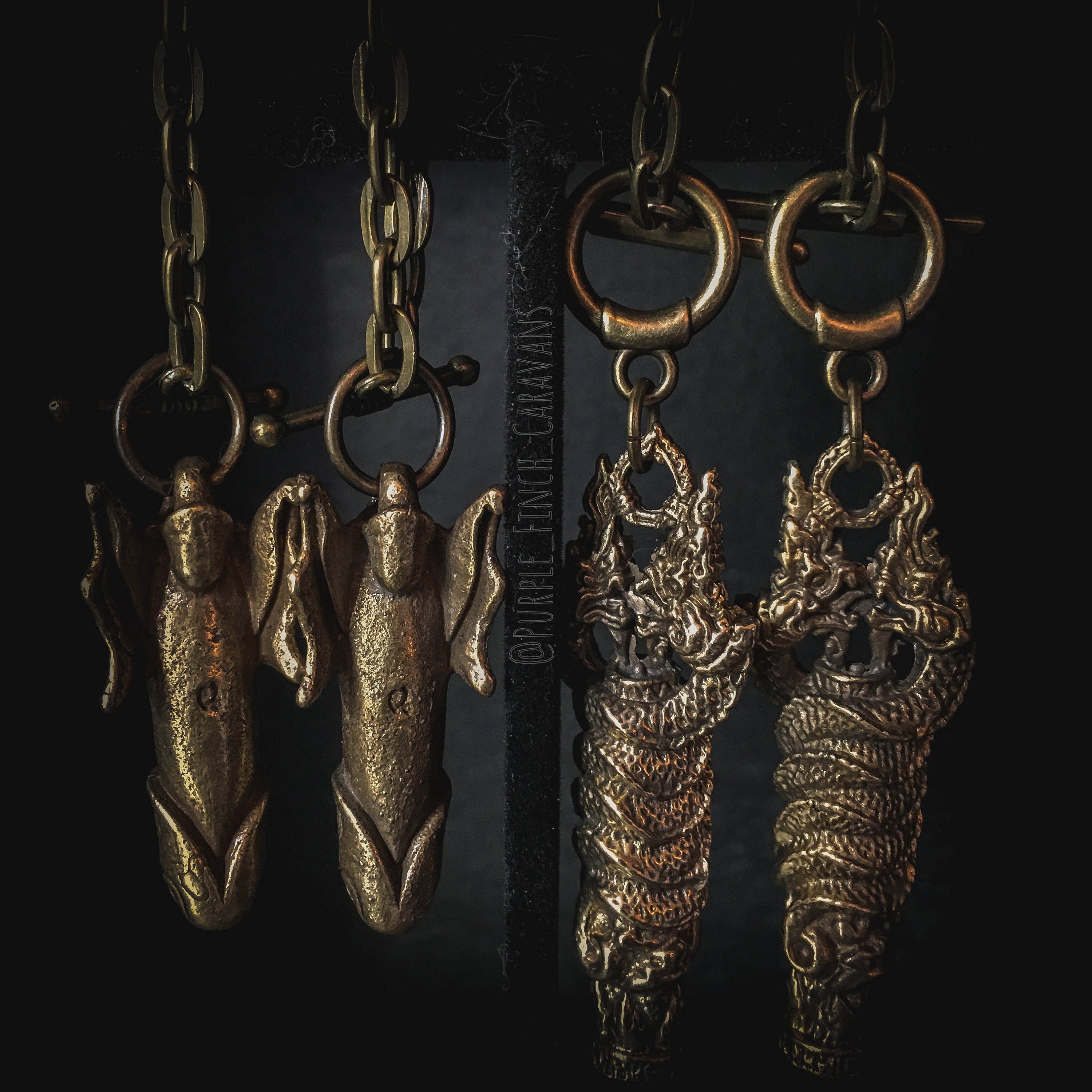 These blessed brass totem amulets are sold as a pair. Recommended for size 00 and larger. Our lovely handmade weights thread through your gauges and back through the loop of the toggle closure.
Individual details below.

The phrase "paladkhik" means "honorable surrogate penis". Paladkhik originated in India and relate to the Hindu god Shiva, who is usually represented by Shiva Linga. They were brought to Southeast Asia via the Cham people and remained in the region ever since.

The Chinese concept called Yang is similar, where Shiva is represented abstractly in the form of Linga (male genitalia). Sometimes the linga are accompanied by Yoni (female genitalia). Together, the linga and yoni symbolize unity and the powers of creation and destruction. The Paladkhik, as a phallic representation of Shiva, is also an animistic symbol of fertility. It is not uncommon in Thailand to see an amulet hanging on a convenience store or a restaurant.

A notable feature of this type of amulet is it can be worn in places considered as lowly or unclean such as bars, gambling casinos and brothels. Normally, you cannot bring a Buddhist amulet inside such establishments.

In Hinduism, Buddhism and Jainism, the naga are a divine race of half-human half-serpent beings that reside in the netherworld (Patala) and can occasionally take human form. They are principally depicted in three forms: wholly human with snakes on the heads and necks; common serpents, or as half-human half-snake beings. A female naga is a "nagi", "nagin", or "nagini". They are common and hold cultural significance in the mythological traditions of many South Asian and Southeast Asian cultures.

Their domain is in the enchanted underworld, the underground realm filled with gems, gold and other earthly treasures called Naga-loka or Patala-loka. They are also often associated with bodies of waters — including rivers, lakes, seas, and wells — and are guardians of treasure. Their power and venom made them potentially dangerous to humans. However, they often took beneficial protagonist role in Hindu mythology.

Request a cancellation within: 24 hours of purchase

I don't accept returns or exchanges

But please contact me if you have any problems with your order.

Domestic wholesale/bulk orders are available either shipped or dropped off in person depending on our Travel Season schedule. All such orders must be placed at least 4 weeks in advance.

When does the 2021 Travel Season begin?

Why are you wandering?

We travel around the continental US during the warmer months in order to collect the ingredients required for our craft. We strive to ensure our creations and products are as sustainably sourced and authentic as possible.

All of that aside, the pack also just enjoys roaming in general.

I sent a message/email but haven't received a reply; what's going on?

Due to spotty cell signal during Travel Season our email/messaging reply days will be limited to Fridays, Saturdays, and Sundays only. The exceptions to this will be any readings or scheduled consultations confirmed in advance.

It's incredibly difficult to get wifi in the middle of nowhere, so we *try* to be closer to civilisation on a regular basis to offset some of our unconventional nature of work.

I live outside the US and haven't received my order yet; where is it?

Unfortunately we have no control over the shipping speed of international orders, especially during this pandemic era when various countries have different customs requirements for postage.

When will my order ship?

During our Travel Season, designated mail drop-offs to the post office will be limited to Fridays and Saturdays only. Therefore, if you place your order on a Monday, your shipment will go out that Friday or Saturday at the very soonest.

Please refer to the estimate specified on the item listing, or contact us at Support@PurpleFinchCaravans.Com

0 items in your cart